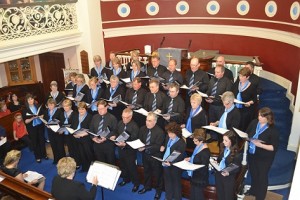 Landsker Singers are a mixed voice choir from Pembrokeshire, West Wales, formed originally as a ladies choir in 1990 by Shirley Williams and Edmund Walters. The choir gets its name from the imaginary Landsker Line in mid-Pembrokeshire which distinguishes the Welsh speaking north of the county from the more English speaking south. Most of the choir’s members live close to this line.

As well as the adult mixed choir there is also a youth choir, the Junior Landskers, and a children’s choir, the Little Landskers. Both choirs perform alongside the adult choir, as well as giving their own independent performances.

The choir performs a variety of both sacred and secular music and particularly enjoy the work of contemporary choral writers such as John Rutter, Howard Goodall, Eric Jones and Bob Chilcott. However, their repertoire contains music by a variety of composers from Baroque to twenty first century.

They perform regularly at fund raising concerts, weddings and events throughout Pembrokeshire and are often requested to travel outside the county to give choral performances. Our young singers from the Junior Landskers and the Little Landskers were honoured to be selected to take part in a performance to celebrate the Inauguration of South Hook LNG in the presence of Her Majesty Queen along with members of the United Kingdom and Qatari Royal families in May 2009. In 2010, the adult choir were delighted to take part in the Ryder Cup, Welcome to Wales Concert at the Millennium Stadium in Cardiff where they performed as part of the massed chorus of Welsh choirs.

The Landsker Singers have made their fourth recording, “Great is the Story: the Appearance” which explores the life and ministry of Jesus. The double CD is now available for purchase.

To date the choir has given more than two hundred performances including several recordings for the BBC World Service and for Sunday Half Hour for BBC Radio 2.

The Landsker Singers is a registered charity with the Charity Commission.