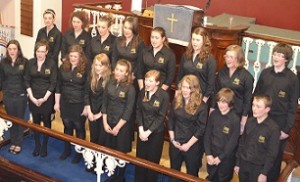 Young singers were first introduced to the family of the Landsker Singers in 2000 as a childrens’ choir under the name The Little Landskers. As the girls grew into young ladies their name became somewhat inappropriate, many of them now taller than their adult counterparts, and their new name, The Junior Landskers was introduced. 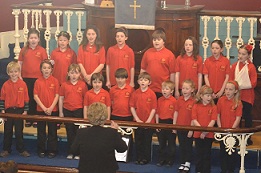 This, of course, left a wonderful opportunity to develop some new, younger singers and as a result The Little Landskers continue in the shape of new children’s choir comprising girls and boys of primary school age.

Both choirs perform alongside the adult choir as well as giving their own performances.

Singers from the Junior Landskers and the Little Landskers were honoured to be selected to take part in a performance to celebrate the Inauguration of South Hook LNG in the presence of Her Majesty Queen along wih members of the United Kingdom and Qatari Royal Family in May 2009.

The Junior Landskers were delighted in 2014 to perform at The Royal British Legion Wales Festival of Remembrance at St David’s Hall, Cardiff. Also performing at that event was Welsh soprano, Katherine Jenkins.