The Landsker Singers excelled themselves in their annual Patrons’ Charity Concert on Saturday, demonstrating their ability to adapt to all kinds of music and perform it with aplomb. Their guest artiste, virtuoso guitarist/composer John Rodge, one of Wales’s top classical guitar players, provided a contrasting ingredient to the concert, staged before a large audience in Tabernacle Congregational Church, his digital dexterity and rich chords and cadences thrilling his listeners. 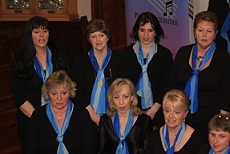 Ranging from Mendelssohn to Manilow, Britten to the Beatles, the concert fulfilled everything that much-used adjective ‘eclectic’ signifies, also confirming the fact that the Landsker sound improves with every performance. That includes the two younger groups of the choral trinity – the Junior and the Little Landskers – whose joie de vivre shines through in every word-perfect song they sing. 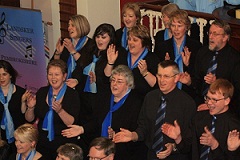 Under the baton of founder Musical Director Shirley Williams, with Juliet Rossiter accompanying, young soloists Tomos Hopkins, Aaron Kendall and Ben Richards made an important contribution, while the backing was augmented by young percussionist Glen Alcock and bass guitarist Simon Rees. The programme was skilfully compered by President Pat Swales Barker and came to a rousing climax with a Beatles Medley which brought the house down with a well-earned encore. Choir Chairman Cerwyn Davies presented a cheque from the proceeds to Sybil McBrearty for the choir’s chosen charity, the Cystic Fibrosis Trust. The concert was a celebration not only of the Landsker’s impressive track record of 23 years, during which time they have raised many thousands for various charities, but also of Shirley Williams’s recent richly-deserved Honour.