The Landsker Singers are delighted to announce the world premiere of their specially commissioned work. A new work by the eminent Welsh composer Eric Jones was given its premiere on 2 December at St Mary’s Church, Haverfordwest by the Landsker Singers. ‘The Nativity’ is a full length Cantata embracing the season of Advent and the birth of Christ, the libretto of which was written by Rev Dr David Owen, a retired Minister now living in his native county of Pembrokeshire.

The performance had been awaited with great anticipation by friends, family and followers of the Landsker Singers who have devoted many months to learning the new score. This first performance was a triumph, with Musical Director Shirley Williams successfully marshalling the three elements of the Landskers (Little, Junior and Adult), orchestra and organ and creating an inspiring performance. Eric Jones had composed the work with the fine acoustic and size of St Mary’s Church in mind and the church proved an admirable venue for the sell-out concert. 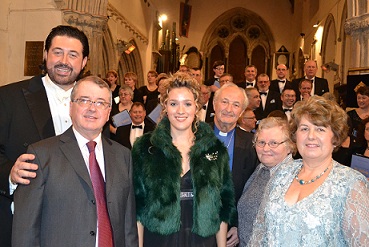 The excellent soloists were Anthony Stuart Lloyd, bass-baritone and narrator, and Georgina Stalbow, soprano. Georgina has had a connection with the Landsker Singers from the age of eight, and is currently developing her professional career after gaining a First Class Honours degree at the Birmingham Conservatoire of Music. Cardiff- born Anthony has performed in operas, musicals and concerts worldwide and brought this experience to his role in this new work.

The work, part of a projected trilogy entitled ‘Great is the Story’, follows the pattern of a baroque cantata, with large choruses interspersed with solos, chorales, and smaller scale choruses, including the youth members of the choir. The narrative, in poetic form, revealed the Christmas story and the audience was encouraged to join in a number of Advent and Christmas hymns.

The concert was recorded by an ITV production company for inclusion in a forthcoming documentary which will include the contribution the Landsker Singers and their founder and director Shirley Williams have made to their community.

Having commissioned the work, with the generous support of Valero Pembroke Refinery and Ty Cerdd Music Centre, Wales, the Landsker Singers have exclusive rights to perform it for 12 months, and its publication will be eagerly awaited by many choirs worldwide already familiar with the choral music of Eric Jones.

The Landsker Singers will include excerpts from The Nativity in their Christmas concerts on Sunday 15th December (at St Martins Church at 3pm, and at St Mary’s Church at 7pm.) . Tickets are available from 01437-710370 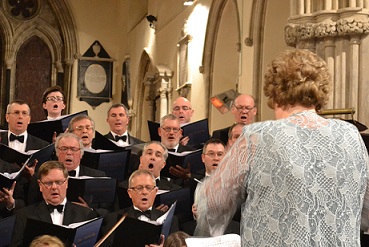