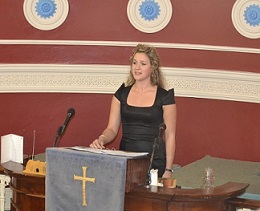 Young musicianship and the long term contribution of the Landsker Singers to Pembrokeshire’s musical tradtition were showcased at the choir’s annual Patrons’ Concert at Tablrnacle Church on Sunday.

A large audience thrilled to the beautiful soprano voice of guest artiste, Georgina Stalbow of Milford Haven, who launched her singing career with the Junior Landskers at the age of eight, and is now an up and coming professional singer with TV and concert hall appearances on her CV. A 1st Class Honours graduate of the Birmingham Conservatoire of Music, Georgina has sung at the Royal Albert Hall and other prestigious venues, recently appearing with baritone Rhydian on S4C. Her professional debut was with the Montepulciano Opera Festival two years ago. Adding another dimension to the Landsker legacy were local teenagers, the accomplished euphonium player Gareth Trott, the equally talented pianist James Bartlett and the Tasker Milward Brass Ensemble featuring Kiran Dearing, Christopher Mayhew, Ben Richards and Gareth Trott. Compere and new Landskers chairman, Pat Barker, introduced the programme which, she said, reflected this year’s two major events – the Diamond Jubilee and the Olympic Games, each item with a patriotic theme. 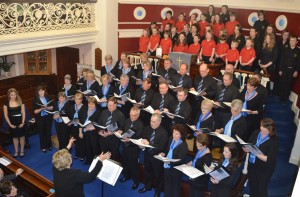 The Landskers, under the baton of founder and Musical Director Shirley Williams, and accompanied by Juliet Rossiter, opened with three rousing renderings, including Holst’s “World in Union” arranged by Pat Barker, while the Little Landskers delighted with three foot-tapping pieces. Georgina Stalbow, accompanied by Lisa Shelmerdine-Richards, demonstrated the range and quality of her lovely voice with three contrasting items ranging from Purcell’s “Fairest Isle” to the traditional “Dafydd y Garreg Wen.” She returned later to a thunderous ovation for her renderings of Edmund Walters’ “My Fisher Lad,” Novello’s “Waltz of my Heart,” and Lloyd Webber’s “Love Changes Everything.” The Landskers ended the first half with Handel’s “Zadok The Priest,” before the Junior and Little Landskers showed their harmonic skills with a medley of lively songs, two of them by Rutter. 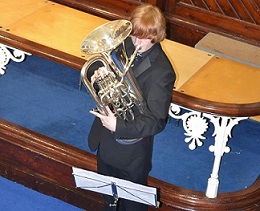 Gareth Trott’s “Rhapsody for Euphonium” with James Bartlett’s accompaniment, highlighted the virtuosity of these young musicians. The combined choirs ended a memorable concert with the entire ensemble and artistes, organist Anne Evans, double bass Ruth Llewellin and Carl Rees, on drums, in a “proms” medley of patriotic songs, including “Land of Hope and Glory” and “Rule Britannia.” Choir chairperson Jane Richards said the proceeds will benefit the Chemotherapy Day Unit at Withybush General Hospital.